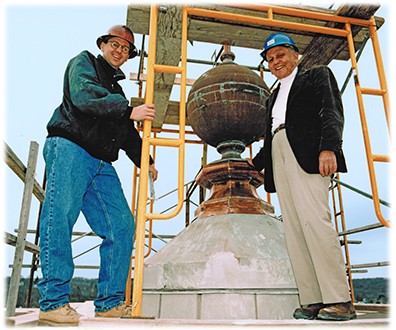 REFLECTIONS OF A LEGACY: IN MEMORY OF JOSEPH GNAZZO
1915 – 2012
By Michael Gnazzo, Co-founder of Cenaxo LLC

From Joseph’s humble beginnings as the son of a Italian immigrant coal miner in Pennsylvania he grew to be a leader with an appreciation for the details. His commitment to quality and integrity was unyielding. He never shied away from work whether it was delivering dry-cleaning as a young person during the great depression to doing what it took to start his own business in the middle of his life. His father Emilio Gnazzo and mother Rose (Vilardi) Gnazzo emigrated from Felitto, Italy and settled in the coal regions of Pennsylvania ultimately moving their family of nine sons to Plainville, CT. They were significant influences in his life and inspired his perseverance amongst many other traits.

Joseph Gnazzo was a man of balance as he made time for family, work and recreation. He was a devoted and loving husband to his predeceased wife Eva Mae Teller Gnazzo and father to three sons. Eva Mae and Joe traveled later in life to places like Australia, New Zealand and many others. They always appreciated home as much as the places they visited. They shared recreation such as golf and tennis.

Joseph Gnazzo was (and continues to be) a positive influence in my life. I cherish the time we shared both personally and professionally as I grew up as his grandson and then part of the Joseph Gnazzo Company, Inc. business. His kind and generous spirit of acceptance was inspirational. He was always welcoming to all and gave where he could personally, professionally and civically.

His legacy of generosity, quality and integrity lives on…