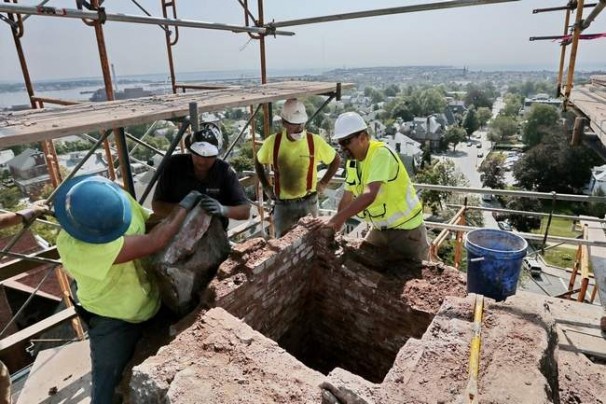 By approximately Nov. 15, the church will have a new steeple consisting of slate and wood instead of brick, granite and brownstone, and the belfry and the brick work below will be repointed, according to Charles Capizano, the church’s junior warden.

The church’s cross will also be refurbished and placed back atop the new steeple, he said.

Capizano said the major repairs are necessary because over the years the brick supports have weathered and can no longer support the enormous weight of the steeple.

The new steeple will be the same shape and the same size as the old one, but will be much lighter because it will consist of different materials, he said.

But the renovation is not changing the city’s skyline in any way, he said.

“What you saw from any point in New Bedford, you will see again because the geometry is the same,” he said. “It’s just that now it will be constructed of slate.”

“It’s going to maintain the structural integrity of that whole portion of the church,” said Sharlene Begley, the church’s senior warden.

The facelift, which began around the end of July-early August, costs about $557,000 and is being funded from a variety of sources — donations from the church’s approximately 500 members; endowments; and contributions from the Episcopal Diocese of Massachusetts, Capizano said.

As well as the work to the tower, the projects include the reconstruction of offices, which were flooded during a storm last year and the church’s education center; the removal of mold; and the repainting of the church’s windows.

“Everything will be energy efficient,” he said.