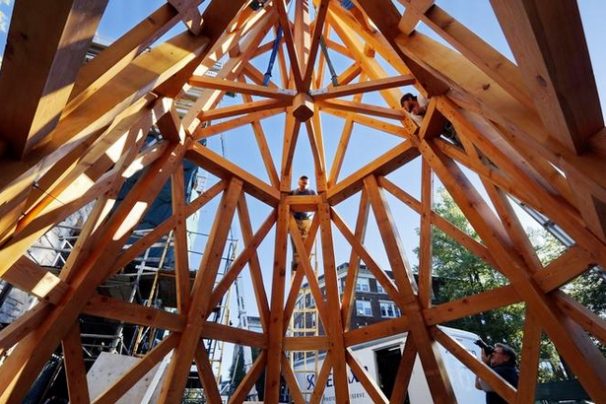 They had managed to install metal braces connecting the top and bottom halves of the Douglas fir framework, which had proven troublesome on Thursday. A year in storage had evidently put some connecting bolt holes out of line but that was overcome mid-morning.

The project enjoyed perfect weather for the second day. Even the wind cooperated by staying light.

Bill Reed, former senior warden of the parish, said that construction crews have remarked that “this is the windiest job they’ve ever worked,” he said. “That’s what you get when you live on the ocean.”

Before the steeple was raised, it was signed by former pastor Rev. G. Kenneth Garrett and his wife Mary Lou.

The next step, now that the framework is securely in place, is to install scaffolding around it so that plywood sheathing can be installed, after which slate tiles will be applied.

The design of the steeple makes it much lighter than the 1880 original, made of stone and masonry, which was so heavy that over the years it damaged the belfry beneath it. That discovery last fall set the project back by about a year.

To help pay for it, the parish conducted a fundraising drive in which the sandstone blocks that made up the belfry were all numbered and put back into their exact locations. People were invited to adopt a block, knowing exactly where it is. The names of the donors will be displayed inside the church in a memorial plaque, said junior warden Charlie Capizano, who manages the building.

The last missing piece is the 500-pound cross that adorned the original steeple.

The preservation construction firm hired to do the steeple project, Connecticut-based Cenaxo, is refurbishing the cross, Capizano said, and giving it a new layer of gold leaf. The cross, which he estimated at five or six feet tall, is mounted on a metal pin that drops into a metal channel at the tip of the steeple.