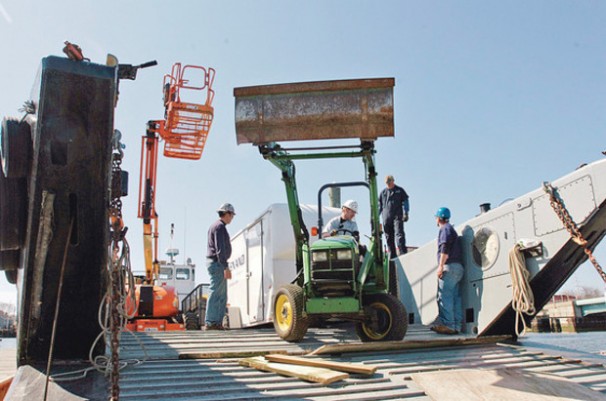 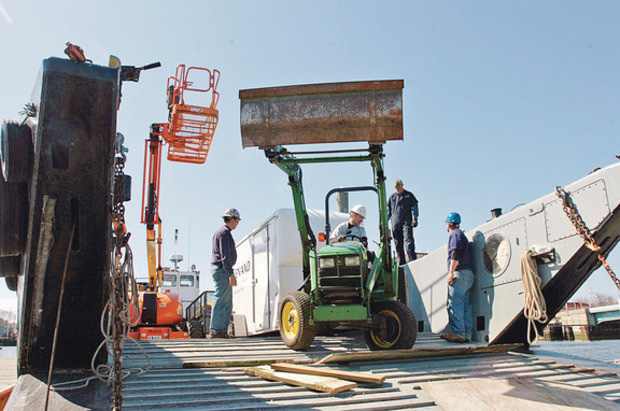 NORWALK – A 74-foot landing craft pulled into the city dock recently as work began on the restoration of the historic Sheffield Island Lighthouse and keeper’s cottage.

The project, funded through a $250,000 grant from the state Department of Economic and Community Development, includes repointing the masonry on both houses, and repairing cast iron, chimneys and the lighthouse tower, which will be repainted in its original gray color.

“We’re going to have a spiffed up lighthouse,” said Peter Bondi, chairman of the Norwalk Historical Commission. “It’s going to look great.”

Darin Meny, co-owner of the architectural restoration company Cenaxo, said the project will take about three months to complete.
Members of the Norwalk Seaport Association, which owns and maintains the Sheffield Island Lighthouse, watched from the South Norwalk docks as the enormous vessel pulled out of the harbor.
The landing craft made two trips to the 53-acre Sheffield Island to transport heavy tools and equipment, including a 60-foot boom lift, a cement mixer, scaffolding, and 5,000 pounds of sand and cement.

“It’s very efficient,” said Irene Dixon, president of the Seaport Association’s Board of Trustees. “You could just imagine transporting all this equipment one small boat at a time.”

The restoration follows last year’s development when the historic lighthouse was set aglow for the first time in more than 100 years. A solar-powered light was put in service on October 17, 2011. The light is not considered an aid to navigation. Activated in 1868, the Sheffield Island Lighthouse was in service for 34 years until its retirement in 1902.

The lighthouse served as a navigational tool before it was replaced by the Greens Ledge Lighthouse, which remains a beacon for wayward boaters and commercial shipping vessels.

Today, Sheffield Island Lighthouse is listed on the National Register of Historic Places and is maintained, along with the island, as a museum and nature preserve by Norwalk Seaport Association volunteers. Dixon said the Seaport Association has put a renewed focus on improving the lighthouse to make it more attractive to visitors.
“We have a lot of new people on the board, a lot of new volunteers,” she said. “We want to make Sheffield Island a destination. It really is our crown jewel for Norwalk. It’s one of our best kept secrets, and we need to improve it, restore it and make it a better place to visit.”

According to Dixon, the restoration project will not interrupt the Seaport Association’s summer tours of Sheffield Island.
Ferry service to Sheffield Island runs through Labor Day. To purchase tickets, visit seaport.org, or call (800) 838-3006.